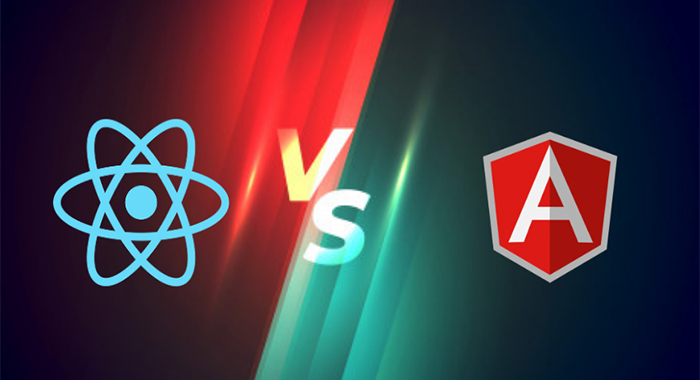 Angular is an open source framework mainly used for creating web apps, single-page web apps and hybrid apps. It is built on TypeScript that is developed and maintained by Google. Angular is a full-fledged toolkit that has everything developers need to build large scale apps. It has gained popularity and many of the leading businesses like Xbox,Forbes, BMW and many more have chosen Angular over React JS for front end development.

So, how is React different from Angular?

React allows programmers to actually figure out how the app will look and how will users interact with it. React can also be used for web apps. It can also be used for native rendered apps and mobile applications. React also has a reusable library code which saves development time and also reduces coding errors. It comes with some of the key features such as DOM and JSX. It is not only used for big applications like Instagram, Netflix etc., it can be used for smaller applications too.

Both React and Angular are great for front-end development. They do equally well when it comes to developing large scale apps. However, there’s one big difference between Angular and React. React uses virtual DOM (Document Object Model) which allows accessing and changing document contents, layout and even structure. Angular 2 however operates on real DOM. For example, if you are updating user profile details, Real DOM instead of changing just that bit of info updates the entire tree structure of HTML tables until it reaches the needed data. Virtual DOM allows us to update the changes without rewriting the entire HTML doc virtually. This renders updates faster. So, no matter the apps’ size – the performance is fast. Well, although Angular is a full front-end framework, the real DOM feature makes its apps slower when dealing with a ton of data requests.

There cannot be a winner among the two – both are trending technologies and used in their own ways to build awesome mobile apps!