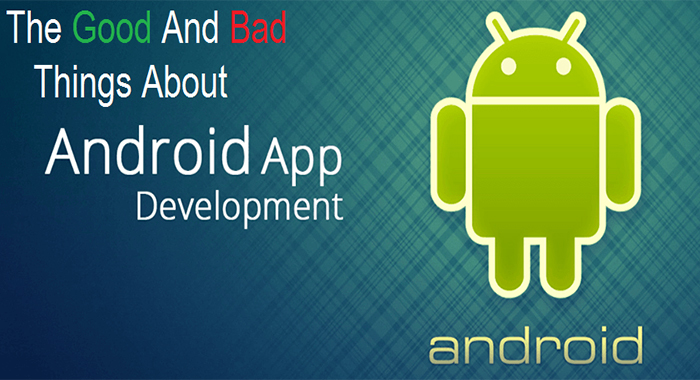 Androids enjoy more than 80 percent of the smartphone market share. It is one of the most dominant mobile operating system today. It operates on a number of mobile devices and is not restricted to any particular device type. This is what makes it more popular than any other operating system. Unlike iOS which works only on Apple devices, Android has the flexibility to work on a variety of different devices. This sounds as though Android Applications Development would be pretty easy right? Quite the contrary, all this makes development for Android all the more difficult, because there are so many things to consider and so many compatibility checks to be done.

Here are the goods and the bad things about Android Apps Development:

In the past, Integrated Development Environments IDEs were used for application development, which weren’t very developed – mostly buggy. There were tons of problems and another set of workarounds that could drive you crazy! These development tools were slow, buggy and totally unfriendly to the developer.

Android is one such operating system that has a number of versions. The older versions were quickly discarded and the Version 4.0 (Ice Cream Sandwich) underwent a complete overhaul. It brought with it new UI elements, new APIs for different devices and compatibility with new screen densities. Developers need to be overly careful while developing apps for older versions as well as the latest versions like marshmellow.

Testing the apps used to be a great deal too. There were different screen dimensions and different Android operating system versions to consider. Emulators did solve this problem but they were painfully slow and totally sluggish.

Honestly, Android apps on the older versions of this OS were boring. iOS apps totally outshined Android apps. This has changed over a period of time and today we see well designed and awesome looking Android apps too!

How things changed for Androids

That was all in the past. Android apps development has changed and today, Android stands at the top of tops when it comes to mobile applications.

Android Studio was introduced by Google and everything started to fall into place. It is a great development tool unlike Eclipse and other development and testing tools too.

Android supports a bunch of smart devices too

Not restricted to smart phones, Androids have support for smart watches and such other smart gadgets. Television, Cameras, cars and kitchen appliances – all can be made compatible with and work with Android operating systems.

Moving away from Java and introducing better database management techniques are a few more steps taken to make Android apps more appealing to users and easy for developers as a whole. A lot has changed in the Android Apps Development scenario and has changed enough so that they now occupy more than 80 percent of the smartphone market.