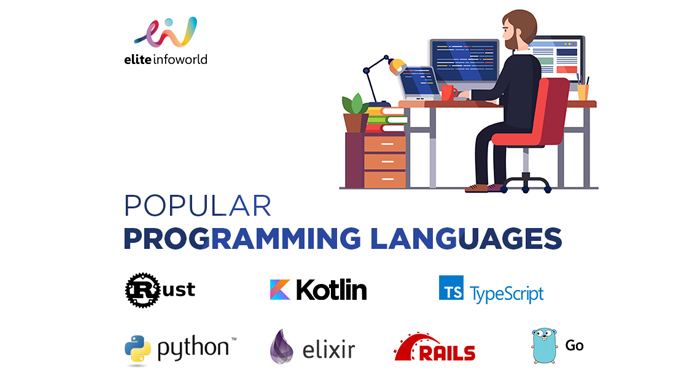 The number of programming languages that have emerged within the last decade is overwhelming. Each language has its own perks and has helped improve web development and mobile apps development in many ways.

Here are the most popular programming languages that have emerged and growing in popularity:

Kotlin was primarily developed by a team from JetBrains. The programming language runs on the Java Virtual machine and can easily be compiled to the JavaScript source code. It’s syntax is not compatible with Java, but it is designed to interoperate with Java code and is reliant on Java code from the existing Java Class library. Kotlin uses aggressive type inference to determine the type of values and expressions for which type has been left unstated. It greatly reduces the language verbosity relative to Java, which demands often an entirely redundant type of specifications. It is a fully supported programming language by Google on the Android Operating System. It is also included in the Android studio 3.0 IDE package as an alternative to using the standard Java Compiler.

Typescript developed by Microsoft and is an open source programming language. It is a syntactical superset of JavaScript and adds optional static typing to the language. It is used to develop JavaScript applications for client side or server side node.js execution. It supports definition files that can contain type information of existing JavaScript libraries and can describe the structure of existing object files. This enables other programs to use the values defines in the files as if they were statically typed.

Python is a high-level programming language. It emphasizes code readability, notably using significant whitespace. It provides constructs that enable clear programming on both small and large scales. It has a dynamic type system and automatic memory management. It also supports multiple programming paradigms including object-oriented, imperative, functional and procedural. It has a large and comprehensive library.

Go programming is also referred to as golang. It is a compiled, statically typed language and features garbage collection, limited structural typing, memory safety and CSP style concurrent programming features added. It was originally developed by Google and it is a free and open source.

Ruby on Rails has greatly influenced the web application development world. It is a server-side web application MVC framework. It provides default structures for database, web services and web pages. It also encourages the use of web standards such as JSON XML for data transfer, and HTML, CSS and JavaScript for display and user interfacing.