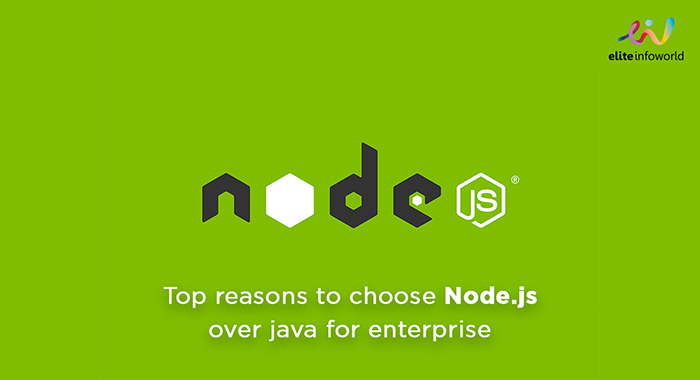 Node.js started in 2009. It is an open source server framework that is JavaScript based and makes the JavaScript runtime better and faster. Node.js runs on various platforms like Windows, Linux and Unix etc. Some of the big names that use node.js are Microsoft, IBM, Cisco, Uber, Netflix, New York Times, LinkedIn, and PayPal. There are some leading points that Node.js development wins over Java. Here, we are presented some of the topmost, real-time benefits why you must choose Node.JS for your enterprise development project.

Enterprise development requires a secure, accessible and well-supported development framework and runtime environment. Most of the developers choose node.js because itcan be used to write application on both server-side and client side. It becomes easier to hold on with JavaScript for both sides of the client and server than first write into java and then switch to JavaScript.

Node.js is all about performance and stability. It aptly fulfils the need for lightweight, performing framework that is tailor-made to the widest technology stack. If you have worked on Java then you understand that the specifications required must be written in XML- a data format that supports programming logic. It is challenging to keep switching from Java to XML every time to build something and this problem is eliminated with Node.js the same language can be used on both client and server side.

Node.js is a JS runtime that uses the V8 engine developed by Google for use in Chrome. The best thing is that those developers who are associated with the community can learn this framework without too much help. When we talk about database queries, Node.js is considered better than Java because it’s easy to mix Node.js and newer databases like Couch DB. You don’t need to remember syntax differences. However in Java, we need different developers to write both SQL and Java. Developers can’t call Java methods but need to write database code in SQL independently.

In the development of node.js the most important problem is the poor performance of applications and software because it was hard to establish concurrency in many server-side programming languages. Node.js was the best solution for it. It also has an event-driven architecture and a non-blocking I/O API, due to which, the application is enhanced for scalability and throughput. This JavaScript framework uses event loops instead of process and threads so there are no other overheads that will slow down the performance. The server automatically enters in the event loop and once a call back is performed then this makes it work like a speed of light, that no other language, not even Java can do.

We considered almost all things and this debate will never end whether you should choose Java or Node.js on your server. Java has a solid mathematical foundation having the complex Date code for both Georgian and Julian calendars. There are elaborate IO routines, better IDEs, remote debugging. Node.js is the best runtime environment for the development of next-generation enterprise applications or mobile and web integration in IoT. And the debate continues…