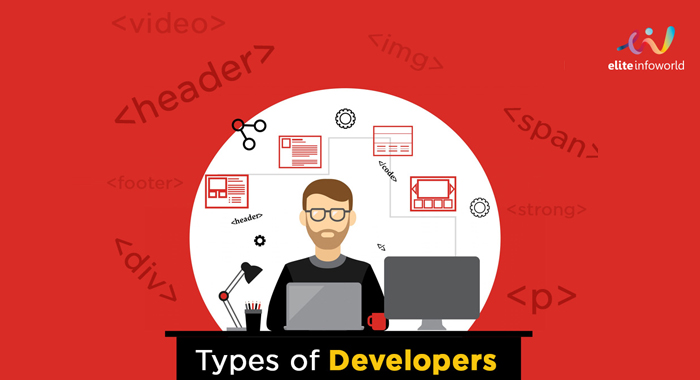 Forged by the relentless innovation in the software industry, every few months there are new areas of specialization and new technologies. There are so many types of developers that it becomes overwhelmingly difficult to choose the right one for your project.

Here is a list of developers that you might wish to know about. Understanding the skills for each of them will enable you to make the right choice.

The frontend Developer specializes in the visual user interfaces that usually includes the layout and aesthetics of your web apps. This is high level work and includes an understanding of human – software interactions and a thorough understanding of presentation. Frontend Development skills include UI design, UX design and HTML, CSS, JavaScript and other UI frameworks.

The backend developer specializes in the functional core logic of the application and also takes care of the design implementation, performance and scalability of the software. Backend developer works with Java, C, C++, Ruby, Perl, Python, PHP development etc.

A full stack developer works on both frontend and backend and can create fully functioning applications.

Non-UI code that runs in a browser and often working with a non-core code running on a server is usually what a middle tier developer does. You can think of middle tier as the ‘plumbing’ of the system. Usually the developer is not a specialized fronted or a backend developer, but can do a little of both. Ofcourse, he is not equivalent to a full stack developer.

A web developer specializes in creating websites. They could be a mix of frontend developers, backed developers or full stack developers.

A desktop developer works on software applications that run natively on the desktop operating systems such as Windows, MacOS, Linux etc.

A mobile developer creates code for applications that run on consumer mobile devices such as smartphones and tablets. He works with the mobile development environment and frameworks that are used to write software on mobile operating systems and works with programming languages that includes Java, Swift, and Objective-C.

A graphics developer specializes in software for rendering, lighting, shadowing, shading and such other technologies related to the ‘look’ and feel of the application being developed. Frameworks include DirectX, OpenGL, Unity 3D, WebGL. For more advanced graphic developers, low-level development requires C, C++, and Assembly.

A game developer has specific skills in designing and implementing engaging and interactive gaming experiences. They are skilled in frameworks that include DirectX, OpenGL, Unity 3D, WebGL and languages such as C. C++ and Java. Added skills include Adobe Flash, Java Script and HTML5. For mobile devices Swift and Java are essential.

A data scientist programs software that can be used to analyze data sets. These include statistical analysis, machine learning, data visualization and predictive modeling. They use SQL, R, and Python.

There are many options when it comes to software development. It is essential that you understand your requirements in order to hire the right developer for your projects!