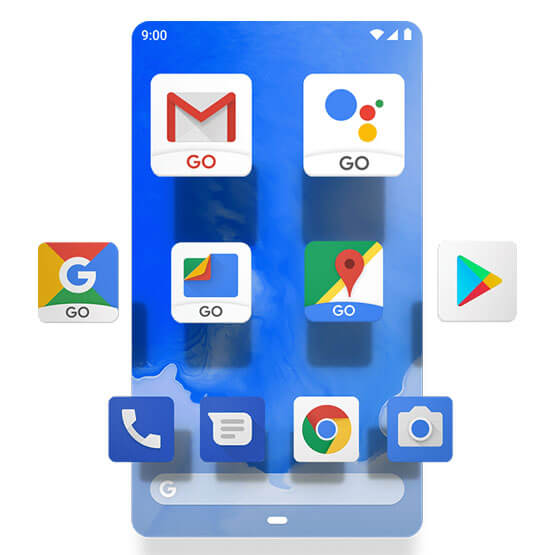 Android Go is a stripped down version of Android. It is especially designed to run on entry level smartphones. It comprises three optimized areas – the Operating System, Google Play Store and Google Apps. These have been redesigned to provide a better experience on lesser hardware.

The Operating system is reimagined to work on smartphomes with 512MB to 1GBof RAM. The very first version was modelled on Android Oreo and the latest version is based on Android Pie. Phones with this OS receive updates like regular Android phones. The Android Go OS takes up less space than the regular Android version giving the smartphones with low storage space more room for media and apps. Most of the Android Go smartphones come with 8 – 16 GB of storage space. The apps open 15% faster than regular phones. The OS also has enabled the data saver mode for lower consumption of mobile data.

Google has also developed apps to ensure optimal use of the device’s memory. These require up to 50% less space and perform better on low end hardware. There are only 9 pre installed apps – Google Go, Google Assistant Go, YouTube Go, Google Maps Go, Gmail Go, Gboard Go, Google Play Store, Chrome and Files Go. These apps may be slimmer and faster but also may lose some features. Many more Android Go apps will be seen in the future, but for now these are the ones that are available by default.

The Android Go devices have access to an exclusive version of the Play Store. The Android Go Play Store offers all of the same content as the regular store, but the store front is suited for low storage devices. It also has a featured apps section that recommends apps specifically for Android Go.

As the demand for smartphones increases, emerging markets will have a lot of users where the purchasing power is low. That’s why Google created a new generation, affordable version that will work faster, provide more storage and help reduce data consumption.